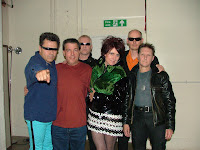 I had the oppertunity of chatting to the Rezillos and playing their music on the late show on Thursday night.

The rezillos were formed in the 1970s and have appeared on Top of The Pops and shared a stage with Souxie and the Banshees and other pop icons of that era. They also wrote the song "Dont you want me" for the Human League,

Jo Callis is the man who gave the Human League a top hit by writing "Don't You Want Me" and also was once part of them.

They appeared live at the Canteen Media and Arts centre in Barrow last night and the radio interview including their original "Dont you want me" is availabe for download.

Click here to go to the audio page and download anything I have done on the radio.

Please check out their websites at